ON the evening of the 6th inst., I met Judge SMITH, of St. Augustine, at a private house in this city, and found him in the presence of ladies, indulging in rude and ungentlemanly language of altercation and dispute, which I felt it my duty to put an end to, as soon as my attention was called to it. In my endeavors to do this, I incurred the like treatment, which resulted in a personal affray, and was stopped by the intercession of others, and in respect for the host, and the presence of the ladies – with the understanding that it would be attended to on the morrow. I accordingly this morning addressed him the following note:

ST. AUGUSTINE, E.F. June 7th, 1839.
SIR, – For your ungentlemanly and rude attack upon me last night at Mr. CLELAND’S, under circumstances that prevented any action on my part at the time, I have to request immediate satisfaction, and meeting at the earliest possible moment, as I am obliged to leave town on duty in the morning.
I am Sir,
Your ob’t Serv’t,
N. DARLING,
Lt. 2d Dragoons.
To Judge SMITH,
St. Augustine

Which he returned to my friend, with the simple remark that finding my name attached to it, he did not choose to be acquainted with its contents, alleging that he only knew me by report, and from the meeting of last evening – which was of a nature, in his opinion, to forbid any further intercourse. Under these circumstances, I pronounce him a COWARDLY SCOUNDREL, and deem no apology necessary for taking satisfaction from him whenever and wherever I meet him.
N. DARLING,
Lt. 2d Dragoons
St. Augustine, June 7, 1839

The above affair has just ended by
Darling’s giving Judge Smith a most thorough thrashing – the Judge having first attacked him. 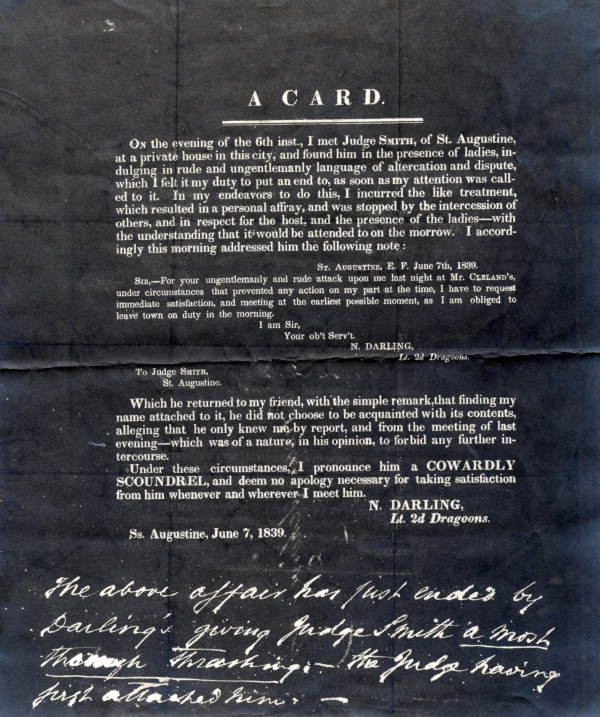 1 thought on “AN HONORABLE DRAGOON”