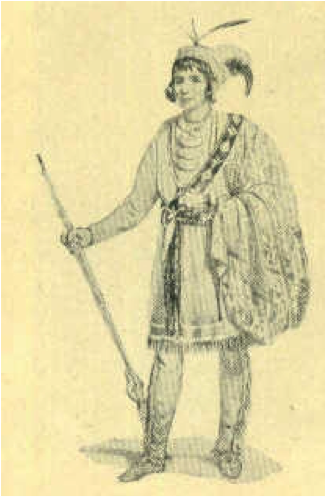 Notable among the many scouts made by the Second Dragoons in 1841, was the one made by Company I under Captain B. L. Beall as a part of a force of 450 men under Colonel Worth, comprising also the Eighth Infantry. Leaving January 22, they traveled from Fort Brooke toward the Kissemmee River but found the entire country inundated. The net result was that the chieftain, Coacoochee, agreed to meet Colonel Worth in conference March 5. As it was desired to convince him of the necessity of moving his tribe to Arkansas he was treated with much courtesy. On one occasion when the officers were giving toasts while having a drink, Coacoochee asked what they meant. The interpreter, at a loss, told him their meaning was “How d’you do”. The chief immediately said, “Hough”, in a strong voice, and it was repeated by the officers present and, later, became popular throughout the army in Florida. This is supposed to have been the origin of the famous toast used now all over our land.

After the relief of General Armistead by Colonel W.J. Worth on May 31, 1841, new instructions went out to inaugurate a summer campaign. There had been little activity in Florida at this season heretofore on account of the debilitating effect of the climate. The instructions were to find the enemy and capture or exterminate him. The force in the territory at this time had an aggregate strength of 4,831, of whom 1,029 were sick. The force comprised the Second Dragoons, the Third Artillery, and the First, Second, Third, Sixth, and Seventh Infantry. The summer was the Indians ally, allowing him to harvest his crops and lay up supplies for the winter campaign.

The Second Dragoons was constantly searching the 47,000 square miles of territory for the wily savage, and being the only mounted force, was needed in a great many places at the same time. Colonel Worth organized another expedition on June 8, comprising Company I, Second Dragoons, under Captain B.L. Beall, and 140 men of the Second and Eighth Infantry. After a march of forty-four miles, the command then waded all night through a marsh only to find when they approached the village that the enemy had fled. During the march through the swamp, it was necessary for the dragoons to travel dismounted.

Another expedition the same month was undertaken by Company K, under Captain Croghan Ker. He ascended Ocklawaha River to Lake Ahapopka in canoes, sending out small parties to look for the savages. In compliance with instructions, they destroyed everything that might have any value to the enemy, such as crops in the fields. In doing this detailed work it was necessary to drag the canoes through the saw grass, often lacerating the men’s faces and hands. The detachment followed fresh signs of the Indians from day to day but was never able to overtake them. On July 4, after passing through a cypress swamp, they discovered a large lake, which they named Lake Worth. They accomplished one of the main objectives of the expedition, which was to destroy the crops. Among those laid waste were the ones belonging to Tiger Tail, the chief. Proceeding down the river to the confluence with the St. Johns the party arrived at Pilatka July 15, 1841.